Something wrong in Country Mapping

In country Mapping by Azrael42 I am currently up to Oceana. I am Australian, so I was surprised when I saw this. 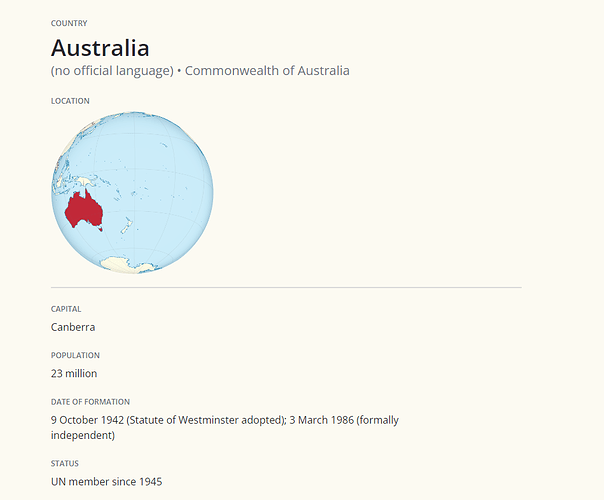 what the heck951×786 55 KB
So According to this, Australia has no ‘official’ language. How old is this? Our official language is obviously English. Is there a way to fix this?
tulpaganger (Blippityblop) September 5, 2022, 2:03am #2

I just thought that area was for if a country name is spelled differently in the native language from how it’s spelled in the course language (English), e.g. Deutschland vs Germany.

Just a warning though, I commented months ago about Eswatini still being listed as Swaziland (the country was renamed in 2018) and I never heard anything back/it never got fixed, so I don’t think that course is maintained anymore.

Ok, thanks for the help @tulpaganger

I restarted this course this morning, and you were right: it is supposed to say English in that area. How strange that so much effort was put into saying there’s no official language.

@MemriseSupport what’s the process behind taking over an abandoned course? Country Mapping needs a few updates. Thank you!

Never mind, according to wikipedia, there is a national language, but no official language at the federal level. How interesting!

The USA doesn’t either! As an American, you have no idea how much that surprises me. We really like making a big to-do about every boring, Saltine thing about us. Anyway, so the course is correct. But Swaziland is still Eswatini now, that’s for certain.

Which countries do not have an official language? | by Kieran McGovern | The English Language: FAQ | Medium

Wow, That surprises me that even America has no official language. How doesn’t Australia have a

official language at the federal level

Well you learn something everyday.