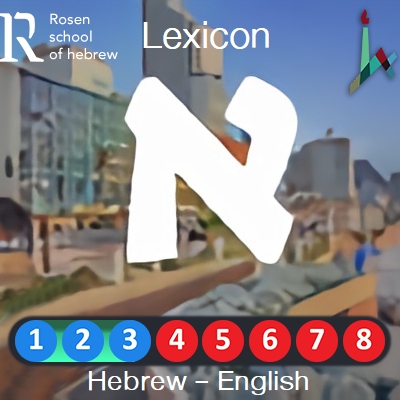 This is my personal combination of the first three lexical worksheets (properly fixed...) of the Rosen School of Hebrew (former eTeacher Hebrew) containing the correct pronunciation from Forvo.com and the cursive form for each word. If you find any...

Full vocabulary course with audio from forvo.com and cursive/handwritten images from @hrothberht script. The link below is the official site of the course from which this vocabulary was made. By now the course contain the first 3 years (first 3 levels) but i intent to update this course as I advance to the next levels in the years to come: https://rosenhebrewschool.com/courses/modern-hebrew/

Here it is, I just need help to bulk upload images and audio from forvo. I have forvo paid API but I still don’t know how to use it properly.

Robert, i found a easier solution shared on this thread by the user @DylanKing1999

Yes the anki extension seems to be the only way that will also include the sound files, etc. This can still be kind of a mess though. To get it in excel for example you will also have to install an anki extension that allows you to export to csv. Here you have to pick ‘basic’ after downloading and put all the attributes you want to keep (anwser, question, audio, part of speech, etc.) on either the back or the front of the card. The sound files obviously won’t be included in the csv file, only th…

Here you have to pick ‘basic’ after downloading and put all the attributes you want to keep (anwser, question, audio, part of speech, etc.) on either the back or the front of the card. The sound files obviously won’t be included in the csv file, only the name of it. The files will be stored (with random names like 9zdf-sdfs5-565sdfsd) in the folder AppData → Roaming → (profilename) → collection.media. You will have to use your own code to rename and sort these files so that you know which is which, if you want that.

If you only want a list of the question and the answer (and not the audio, part of speech, and other attributes only the creator can see), you can simply use memrise scraper 9.

That’s what I was trying to say…

There are quite a few errors in this course in particular incorrect audios that would have been better left without audio rather than using an incorrect one. There are also some questionable English translations when you compare the translation given in the course against say Morfix or Reverso.

Unfortunately Memrise got rid of the in course error reporting feature and it’s too distracting to write each one down when you’re trying to study so I have no specific errors to give you.

Thank you for the feedback, the translations are are all from the Hebrew University material so I think they are more reliable than morfix without a context. Audios are from natives (forvo.com). Can you give a few examples ? Regards.

The bad audios aren’t because of poor pronunciation, they’re from the wrong words. They typically from words with the same spelling but different vowels. This is especially obvious when you compare the audio to the niqqud or transliteration. A couple of examples I can remember are these:

It might make sense to go through each one and compare the audio to the transliteration. I’ve already put most of the words in the course on ignore because I already know them so I’m only actually doing about 250 words and when I encounter an audio error I put it on ignore too so it’s hard for me to remember which ones were a problem after the fact and I won’t encounter them again either.

Most of the problems I noticed so far have been audio but there were a few others like this:

The Hebrew here literally means tree apple, not apple tree which would be עץ תפוחים and עצי תפוחים.

Also none of these imply the for preposition:

They should be just straight her, him, me, us without the for.

For her would be לה or בשבילה depending on context and so on for the other pronouns.

Edit: Also there’s quite a lot of variation in the volume of the audios. This is really difficult to fix after you’ve already done a whole course so if you do another one in the future it’d make sense to use something like mp3gain to set the volume on all your audios to the same before uploading them.

I really appreciate your help. You were the only one that gave me feedback since i started. I fixed all the problems you told, you can check it now.

I don’t know you are a student from eteacher but i would be happy if you join me as a contributor to this course , helping to fix any other errors. The main issue of audios is that i did used a python script to download them from forvo.com but i got the words from the first column (without the vowels) so this is the source of many of those audio errors, i will be running the audio script again this week getting the words from the voweled column and this should be fixing some other pronunciation errors. Other source of errors is the eteacher spreadsheet itself, they gave me a hell of manual work to fix, split word forms and delete duplicates.

I’m studying hebrew to get the academic credits from HUJI (doing Ulpan 4) but i had never been on Israel. Looks like you have a deep hebrew knowledge and as i said i would be glad if you could join me as a contributor to fix any other errors. I have scripts for everything but most of the work is done using Microsoft Excel. Initially i made this course private to help me memorize the vocabulary but i decide to made it public so it can be used to help other ppl, that’s why i would like to make it as good as possible.

I’m deleting and replacing all audios from lvl 1, this time i will use the voweled words (with the nikkudot). It will take a few days to replace all of them cuz my forvo API account has a limit of 500 requests (250 words per day). Did you find any other error ? Thanks

I am late in the game, but did you do the next levels in this course? I have finished level 4 and looking for supporting materials for my next level. Thank you for your work. תודה רבה.