[Several years ago, in their leap to mobile and memrise-sponsored language courses, Memrise made a series of changes that completely broke many, perhaps even most, of the community courses. Many course creators spent hundreds of hours of their own time building and supporting those courses. In the hopes that Memrise might decide to care about about a platform for community courses again, I’m going to post some feedback here about the biggest categories of breakage they could fix. This post is part of that series. If Memrise takes these posts seriously, and responds seriously, that could be an indication that they care about this again.]

On Memrise of old, when a course creator/editor put an answer in their database with part in parentheses, that part was considered optional. For example, if the answer was “(a) land”, the person taking the course could answer either “land” or “a land” and get it marked right.

Some course creators made extensive use of these features, putting hundreds of answers that used commas or parentheses in their courses. Then, one day, as part of their leap to focusing only on memrise-created courses, Memrise just changed both of these without any warning. Suddenly, you had to type the entire answer exactly was it was in the database to get it right. “a land” was now wrong; only “(a) land” would do. “hello” was now wrong, only “hello, goodbye” was now right. And worse, for comma-separated lists, even if you remembered all the answers, you now had to remember what order they were in. “goodbye, hello” is not correct when the answer is actually “hello, goodbye”.

There was an uproar on the old forums the day this happened, and someone from memrise support took notice and fixed the bug. Then he came back soon after to apologize and say he’d been instructed to restore the “bug” because it wasn’t actually a bug. Memrise had decided that their courses couldn’t work with the old way of handling commas and parentheses, so they’d make the change. Large numbers of community-created courses were damaged by this, because it’s now too annoying to try to remember things the course creator never intended for you to have to learn (such as the order of words in a comma-separated list).

My reef fish course is one of the courses heavily affected by this, 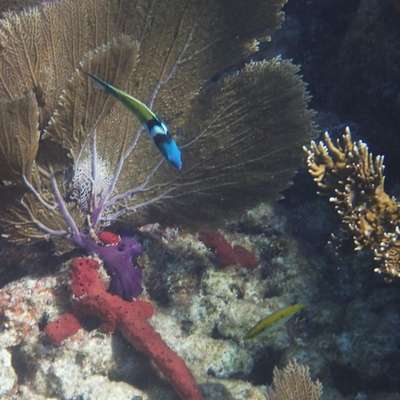 While it is possible for a course creator to go through their course and look at database entries one by one to fix some of these problems, it can be really hard and is certainly time consuming for large courses. Many course creators weren’t even on Memrise anymore, and many others just didn’t bother to invest even more time, not knowing what Memrise might break next.

What Memrise should do:

Memrise should do exactly what I suggested at the time: Make this a per-course setting. On an individual course, the creator or editor would have a toggle to either interpret commas and parentheses the old way, or not.

Next, Memrise would run a one-time backfill job that would automatically toggle this to the old way for any community-created course that was created before the change happened, and which has not been edited since then. Those are courses that can be assumed to have been created with the assumption that commas and parentheses would work like that, and whose creators have stopped maintaining them, so we know they haven’t manually repaired them. With this one change, Memrise would automatically repair all of these courses without having to spend a lot of time looking at each one.

Even better would be to allow this to be set for each level, but that’s more work and memrise probably won’t be interested. But it would be nice.

I may be wrong but after the operation of a comma went, didn’t they allow a semicolon (;) [or word A space semicolon space word B] to do the same thing?

I know there was a long discussion about what to do.

What I did to overcome the issue, was to set up visible or invisible alternatives, which I thought (hope) might be the long term fix.

I also did it for any hint words eg “you (plural)” putting “you” as an alternative.

I don’t know if they added semicolon as an alternative to comma. But none of those are solutions to the actual problem, which is: courses that worked well, suddenly don’t work, unless the course maintainer spends a lot of time on manual effort to fix them up - which many course maintainers never did or didn’t even know to do or are gone and will never do.

A solution would be something that can easily fix all of these courses without requiring people to spend many hours painstakingly going through their databases item by item. That’s why I proposed the solution I proposed here.

@cos FYI, if you need a quick way to fix this on your courses, you could try out this userscript: [Userscript] Replace commas with semicolons

It’s been a while since I used it, so I’m not sure if it’s still working or not, but I back in the day, I used it to successfully restore several courses

Thanks, that could be useful, though some of my courses made heavy use of parentheses as well. Also, I often used commas to make the whole phrase look right - in natural English, it’s normal to give two or three meanings as a comma separated list. But if you know of a way to make parentheses work, I’d try it along with this comma-to-semicolon fix despite the ugliness of the result. Without a fix for parentheses, it’s not worth it because the courses would still be un-takeable.

I thought phrases in parentheses were still optional unless the course had strict typing turned on?

I think you’re right, sections in parentheses were made optional again. Commas still don’t work, though.

Good. If you wish, you could make me a contributor of the fish course. I can fix them when I have time.

Although most of the places I used commas in the fish course could be converted to parentheses, there are some where I do use commas to separate alternative names. Parentheses would not be appropriate in those cases, because the two (or three) names are equally valid. And if I were to resume working on the course and expanding it - which I stopped doing years ago when Memrise started breaking things all over the place - I would likely add a lot more like that.

A much bigger problem is my Hebrew course, where I use commas to separate equivalent alternatives in many many items. Parentheses don’t serve that purpose.

there are some where I do use commas to separate alternative names.

A much bigger problem is my Hebrew course, where I use commas to separate equivalent alternatives in many many items.

In these cases, does semicolon work?

In these cases, does semicolon work?

Did memrise introduce a new feature where semicolon does what comma used to?

It’s utterly stupid because visually a semicolon does not communicate the same thing to someone viewing a list of words or short phrases. But I’m still interested to know if that is a real feature they added after breaking the comma feature?

I found the old guide here, couldn’t find an updated one. Would you mind testing out?

Yeah. that’s a big part of the problem - when they started changing things without warning, and then changing them again, and never documenting how things worked, one of the reasons I stopped fixing things was that it looked like an unsupported never-ending game of guessing their changes, fixing, and then having things broken again a year or two later. I really don’t want to play that rotten game with memrise, until I know they actually care about community courses and want to support them. Until then, it feels like any effort I put into “fixing” any course is a short-term stop-gap that won’t prevent them from breaking it again in the future. I don’t want to sink any more effort or mental state into that pit, only to be made more angry and bitter the next time they break something I put effort into fixing.

@MemriseSupport, would you kindly write an updated guide for how punctuations work on Memrise? Thank you very much.