So first off, I would like to suggest that Memrise implement some way to give feedback specifically about their social media content.

Second, I am concerned about a recent post (screenshot attached) which appears to devalorize Québécois French as an imperfect imitation of “real” French. At the risk of seeming like I have no sense of humour, this is not a harmless joke. It’s “punching down,” and it perpetuates damaging and factually incorrect stereotypes - as can be seen from the number of people who joined in to laugh at, ridicule, and disparage Québéois French and Québécois French speakers in the comments following the post.

As a company whose purported mission is to promote language learning and diversity, how does Memrise justify being seen to condone content like this? And it is effectively condoning it, as no move has been made to remove the post or apologize for it, to moderate the comments disparaging an entire language group, or to in any way respond to users’ complaints about this content, in spite of the number of trained linguists and Québécois users of the platform explaining the problem to Memrise and asking for such actions to be taken.

And Québécois French is not a “minor” variety; it has over 7 million speakers in Quebec alone, to say nothing of the 1-2 million speakers of related varieties of French in Canada outside Quebec. If this is the stance Memrise is willing to be seen as taking towards a language variety with this many speakers, what message will speakers of even more minoritized, stigmatized languages and language varieties take from this?

As much as I love the variety of learning activities that Memrise offers in its courses compared to other language apps, if Memrise continues to condone this content I will have no choice but to stop paying my subscription, stop using the app, and stop recommending it to family and friends. I simply cannot endorse a language-learning app that apparently takes such a dim view both of language variety / diversity and of its users. 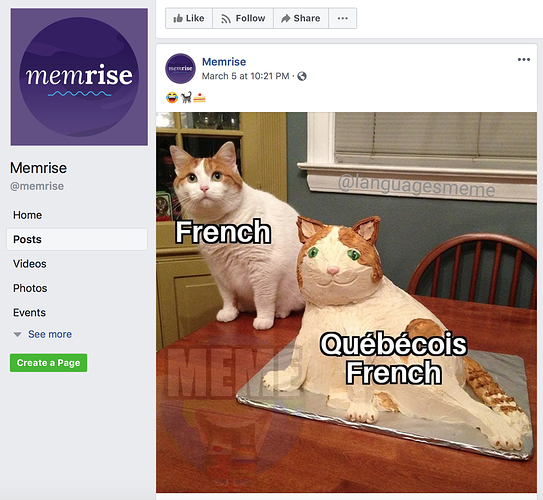 Yikes… Not a smart idea Memrise. You’ve found another way to embarrass yourself…

Next time. Say nothing? That would benefit you a lot. As posting content like that won’t get you anywhere. Trust me…

why on earth would you bot instagram followers lol

Thank you for raising your concern about this post @nytquill17. We had been receiving and listening to, feedback regarding this post, and as noted in a comment on this thread, we have since removed it.

We didn’t intend the post to negatively portray Québécois French, and we are disappointed that it came across that way. As you said, we do promote language learning and diversity, in fact, our social media content is particularly curated to celebrate the wonderful weirdness of languages - celebrating its differences, similarities and overall its power of helping us connect and grow as humans. We clearly created a disconnect with that post, and for that, we are sorry.

We are already paying more careful attention and sensitivity with our social media content. We are all on a learning journey, though, so if we make other mistakes - and we hope these are more in the realm of spelling and typos, rather than cultural insensitivity-, we hope to have the opportunity to address them by communicating with each other and moving forward knowing how to do things better.

Because it raises popularity. It’s not about having bigger numbers (or maybe for someone it is). The Instagram bots see that your post is appreciated and has a lot of interactions and raises it towards the top. That’s why like bots are mainly used. There are a lot of paid services (click here) that help profiles gain popularity that way. Companies and upcoming stars use these services for advertising on Instagram.