Memrise (japanese) keeps throwingin complex kanji, expecting me to memorize them... i am on- like- my first lesson

I am on a very easy course, and it is throwing in complex kanji!! i am only learning hiragana and basic vocab right now!! it is far above my level, and i do not want to learn the kanji, only the hiragana for it!! can i turn off kanji or something??

why don’t you take another course???

But the Memrise Japanese course should be better thought out. Throwing in random Kanji while the course hasn’t finished teaching you hiragana and hasn’t even started teaching katakana just makes thing super confusing.

when i started japanese on memrise (took it from zero) i started with a hira course, a kana course, and some basickanjies and doing vocabulary in paralel, then i went for more difficult courses. i agree, if you start from zero like i did it is very very hard to keep up. but i know memrise has 2 official courses, one easier and one harder with kanjis and stuff… i dunno which one you picked, but anyways try hira and kana separate 1st…

I am studying Kana through a different method that teach’s me to write it as well as read it. I was using the Japanese with script course to give a booster to my kana and to learn vocabulary. Kanji I intend to learn later once I’ve finished studying Kana. But yeah throwing in full words and sentences in Kanji without the course introducing us to kanji was a bit much for me to understand as I can’t differentiate the different kanji at this time.

I just came to the same concluding after doing the introduction and almost finishing lesson one, this is like fundamentally wrong, katakana and hiragana are the first thing one should learn yet still in lesson two no katakana, even worse, learning loads of katakana words in hiragana (the wring way really!) and throwing in 100 kanji already. So sad to have to give up this app where I had all my trust in and spent so many hours already …

The old version of the Japanese course (first version) had hiragana in the beginning, and even the words in katakana, the course featured in the form of hiragana. And the course also featured some kanji’s.

Memrise recently started releasing new versions of its courses (see here), and in the beginning it was languages for British English speakers, then for American English speakers, and now it has begun to launch into speakers of other languages. For many languages, Memrise has launched the new courses 1 & 2, but for Japanese it is 0 & 1 & 2.

The Japanese 1 had the figure of a girl, and the current version of the Japanese 1 for English speakers has a picture of sakura. 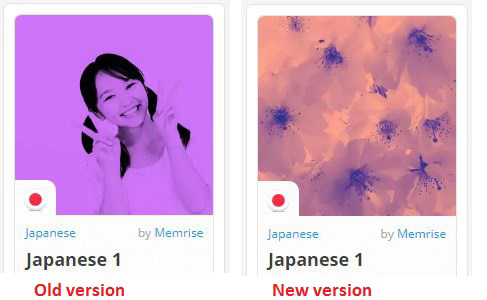 With the new version, the official Japanese course starts with “Japanese 0”, which has only hiragana and katakana, with the exception of the final level, which has some numerals in kanji. But “Japanese 1” already has kanji’s.

if you want to fix katakana and hiragana before moving on to a course that has kanji, there are several community courses. See the post below written by @tampora, which gives many suggestions.

The links are already from the new site Decks (sister site of Memrise), which will be officially released soon, but it is already in the beta phase, and can be accessed with the same Memrise login. For now you can access them from both the Memrise site and the Decks website. The link is:

Hmm, personally I can’t stand romaji, it actually always confused me more than hiragana/katakana. If you have the hiragana/katakana down, my advice would be don’t worry about the kanji for now. What I mean is don’t learn their readings yet, first work on the meanings of the kanji through a course like one of these: Then in the meantime, work on learning vocab that only uses hiragana/katakana, courses like these: Then once you get a good grasp of a good bit of varied vocab and a …

There is indeed a lot of ignorance in the advices given, maybe also different for everyone.

For me I see it as a whole, hiragana and katakana can succeed each other quiet fast, in the end it is just the same but written differently, the logic behind it is the same.

Then once you get a hold of that là je is ready to get kanji into the game.

I am sorry that you are so flustered, but please note that the people who are responding in this forum are all just users, like yourself. None of us are employed by Memrise. We are just trying to be helpful.

Seeing as this thread seems to be mostly about the official memrise Japanese courses, I have moved it to the forum for these courses, instead of the Decks forum for Japanese.

deeper i go into the “official” memrise for Japanese, more absurd they seem to me…

like someone taking “Japanese 1” would ever be able to ask firstly 何かおもしろいいイベントはざざっていますか, understand what is said in the middle of a crowded, noisy event and then to ask “what is that ninja/maiko experience”, and then to even understand the answer… c’mon seriously???

did I forgot to mention that in-house Japanisch 1 and Japanese 2 offer two different Japanese translations for bill/Rechnung??? this being not the only example of this sort…

Gosh, that does seem a little absurd!

The one thing that bugs me about the official courses is how they all follow this same pattern with the same informal English style being imposed on every single language. There doesn’t seem to be any allowance for other cultures having different communication styles at all; we are expected to use this informal British/American tone in whatever language we learn.

I miss seeing a bit of cultural individuality in these courses, to be honest.

the differences between the Japanese courses for German-speaking and those for English-speaking folks are himmelschreiend, absolutely mind boggling. Just to mention the adjectives…

and the informal style (from fiver, tenner, to eternal buddies), that is an old issue, i suspect has to do more with the smombie-generation than with “culture”… memrise itself as well addresses every user with “du”… unfortunately, this whole planet seems to forget how nice politeness is…

thanks, i kinda now that, what i was saying is that only one version is considered correct in the respective course…

Note to Memrise - this is bonkers and makes the course very high friction as the kanji is thrown in at the most basic level - phrases like “cheers!” or “let’s go”.

This should be a setting in the app, so that people who want to double down on kanji can do that at their leisure.

Hopefully someone within the company is tracking the course drop-off rates and digging into the content improvements.

Memrise is reviewing the courses and updating them. English now has a Japanese 0 that introduces just the kana and the kanji for numbers to provide a foundation, and the new Japanese 1 and 2 are decidedly less kanji-heavy. I expect that they’ll be updating the courses in the other languages as well.

The first is safer - the other is easy to confuse with:

See here for an amusing take on this.