seems like someone’s using a bot, or is 24/7 on the same course to get a boost in points
no no, I am not very competitive to care that much, it’s just pathetic, so I thought admins should know about this 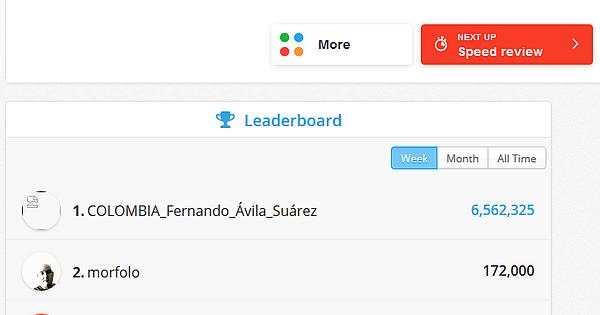 Yes I saw this too and I reported it to Memrise. But nothing has been done about it so far.
This person gained almost 23 million points in only 6-7 days. It’s absolutely not normal… 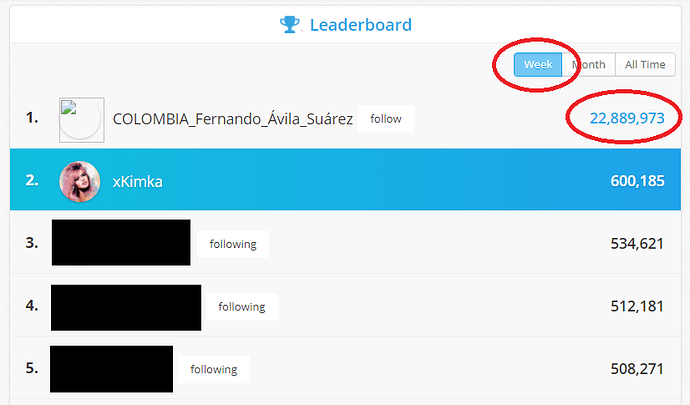 I have two too.
If I woud be an admin I would ban em permanently.
I can do millions points in a day, but it’ll take me almost 8 or even 10 hours.
These users are pro. It takes just several minutes em to reach one million or more in ten or twenty minutes.

I don’t care that much for points either, but since someone opened a thread on “cheating” I would like to contribute to it. 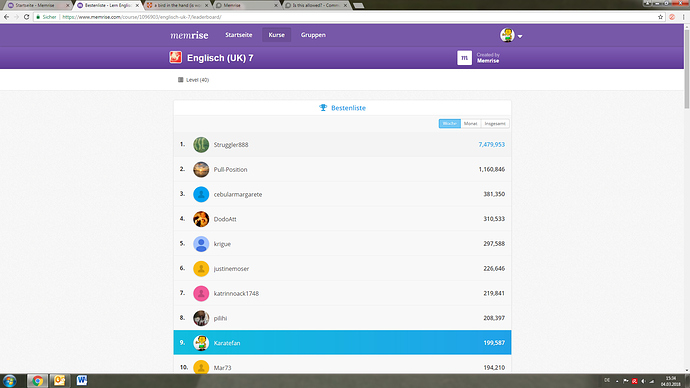 So it seems that some people on Memrise have found a totally new approach to “studying”.

Anyway, who cares about those rankings, it’s all about learning a new language, isn’t it?

damn so they’re quite widespread, such a shame

There may be two different things going on that could both seem like cheating, at first glance.

First, those users who continuously earn millions of points per day likely are “cheating” somehow.

But in other cases, where a user’s score occasionally jumps by a few hundred thousand or maybe even a million points sporadically, perhaps that could be caused by using the app in the offline mode for a period of time. Then when they connect, their points are updated on the server all at once to reflect all of the studying that they were doing offline. I also remember the Memrise personnel saying that there are sometimes system delays in posting points and learning progress to the users’ accounts, so that could also explain some sudden jumps in points, for entirely innocent reasons, which don’t indicate any sort of “cheating” by the user.

If you are interested in a Leaderboard that excludes points earned through scrips, see this thread:

Around post 151 and again at post 217, there is a link to a marvelous user-created Global Leaderboard by @Clex that applies a filter so that it doesn’t count users with an abnormally high number of points per word.

Of course the filter is not perfect, and of course it will exclude some users who, as you describe, might have a large number of points per word for legitimate reasons such as restarting a course, extensive drill, or deleting their learning history by choice. And as someone will inevitably point out (heh), the points aren’t really “for” anything, and different languages, typing versus non-typing, etc, means that we are comparing apples to oranges anyway.

Nonetheless, some users do enjoy having access to a global leaderboard that is based on points, more-or-less contains users who are demonstrably learning “something” and that excludes users who appear to be using Memrise for unknown recreational purposes aside from learning thousands of items.

Note that I do not other users “cheaters” - what is there to cheat at? Just that some users, as those pointed out above, are not demonstrably learning chunks of stuff. Even in your completely legit example, when you deleted all of your learning, you were not in a state where you could be said to demonstrably be learning. But that state passed quickly. You are now below 4000 points per word, and you are at position #17061 among users who have fewer than 5000 points per word on Memrise.

Hey, just spotted this topic. Apologies for the late response.

From my investigation, this user is definitely a cheater and is using a bot of some sort. The account will no longer appear on the leaderboard and has also been terminated.

No one likes a cheater.

I am very glad. Thank you for looking into it! Better late than never

@Joshua thank you for being on point with this stuff. The community really appreciates it.

Second user is this COLOMBIAMERICA. He used to be in the leadership top in this course, but seemingly was banned and now again doing this shit.

I wrote about this to moderators, but no result. Hope you do smth.

The third is NatalyaSh92 (the same course). Now she’s still but she is probably accomplice of YuriyRute12 and uses cheats lesser but uses!

Second user is this COLOMBIAMERICA. He used to be in the leadership top in this course, but seemingly was banned and now again doing this shit.

I can confirm that this guy is back and doing his same routine again. You can also check it in this course: Leaderboard - Learn Russian on Memrise - Russian 7 - Memrise

I wonder if he will ever give up. What’s the fun/purpose of cheating so much? Even after his account was already terminated once.

YuriyRute12 and NatalyaSh92 are long term users from what I can see and must had found a bug in the past.

Please let me know when those two users are cheating again (abusing a bug or using a script to gain points) and I’ll happily terminate their accounts.

There is no fun in cheating, points should be earned legitimately.

Thanks you for providing solid evidence.

Who would even be bothered to pretend they were learning?

Yeah. I don’t get it, either. They are just wasting their time, money, and bandwidth (if they have any). It doesn’t make them look cooler and it sure as heck doesn’t make them smarter. So the joke is on them, if they want to play that way. Luckily, it doesn’t hurt any of us.

Hmm, a lot of courses I am taking at the moment appear to have people that are magically getting millions of points within a few hours as well…

There is this other topic about someone who gains way too many points in every course because of a bug, maybe all these players have the same problems and farming points trough a glitch? The person in the other topic gained 34000 in one speedreview session which should have given him 1300 according to the end screen

https://community.memrise.com/t/gaining-way-too-many-points-something-wrong/27742/15
This is the topic