Beginning Russian student here. Your course only accepts “спасибо, нет” not “нет, спасибо.” My Russian native speaker friend couldn’t figure out why. Google says “нет, спасибо” is used 40 times more than the alternative. One website (Russian Stack Exchange) stated, “Спасибо, нет” typically shows that the speaker is actually not too grateful for the suggestion. The version “Нет, спасибо” is a neutral to polite refusal.
So okay, you are teaching the version with more sass. But maybe tell us that? And maybe don’t mark the alternative wrong? I’m more likely to say the polite one than the sassy one most of the time!

Hi @ElizabethLilly10. Thank you for the comment. You made a valuable point - both versions can be used depending on the context, although the app format does not allow us to teach you every possible variation of a phrase (no matter how much we would like to do it). But you are absolutely right, the alternative answer should be accepted as correct. This has been adjusted and you may see it if you log out and log in back into the app. Hope you are enjoing the course and please feel free to contact us with any further comments or suggestions. Best regards, Pavel.

Thank you so much for your reply, Pavel!

I didn’t actually expect I would get an answer. I really appreciate your incorporating my feedback.

I love the course. I have lots of experience learning languages, and Memrise has many features that I love.

Earlier this year, Memrise began renewing its official courses. They started with course 1 & 2 for the courses mentioned in the announcement of the beginning of the year (link here), and are gradually renewing for others. They also reported that courses 3 onwards will be renewed in the future, but they did not give a date.

Dear @chrispaans97, thank you for the review. We have started the process of updating our courses, for now we have course 1 & 2 updated, and the rest are to come. Indeed, some items may be repeated on this stage but as they are used in a different context we decided to keep them in the course. As for the native speakers - all they are real people recorded on the streets of Moscow, they haven’e been instructed to speak slower or in any other particular way. That’s just the way they speak

Hope you are enjoying the course. Best regards, Pavel.

Dear @wbuerst, thank you for the comment. We have amended the translation. Best of luck with your studies. Pavel.

@pavel70: There doesn’t seem to be a separate thread for the German-Russian course, so I’ll post this here.

Thanks for your feedback! I’ve checked back with @pavel70 and we agree with most of your suggestions, so most of them have been implemented now.

Thanks again for flagging these

обними меня - You are right, the Russian обними меня is for romantic situations. It’s not the same as a “casual” nimm mich mal in die Arme / give me a hug , which a Russian man would probably express as дай я тебя обниму (let me hug you) - still depending on the context and/or the amount of vodka you’ve had together

Love that about the Vodka! Why don’t you add the “дай я тебя обниму” (let me hug you)" to the course - I do think it’d be a nice addition! I’d translate that to German with the same words and an additional “(unter Freunden)”.

What we could do is add “(romantische Beziehung)” in the German translation, or do you have a suggestion for the translation that conveys a romantic setting?

They definitely say июнь (Juni), but the two words sound so similar that Russians often mix them up

Oh, OK. Have you compared the male speaker for June/July? It does sound exactly the same to me (subjectively - haven’t compared the wave diagrams). But maybe it’s just me and my untrained ears.

Thanks for reacting so quickly!

Awesome, I’ll add the explanation for the existing item (“romantische Beziehung”) and then we’ll think about adding a more casual version for later.

If you want us to translate: »does your friend (male) like comedies?» then you should provide the following sentence as a correct results: 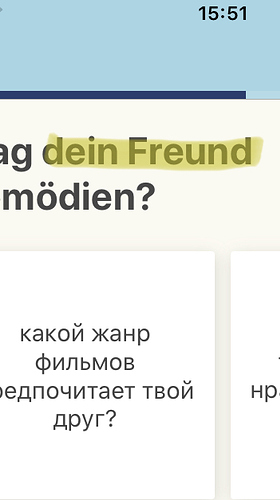 Title says it all - ‘expload’ is used as a verb, this should be ‘explode’ of course.

Yeah, I also noticed that problem but just dismissed it

excuse me, could you please help me?

I am really having a hard time being confident with the system when i find things like this.

In order for us to be able to put together our own phrases in everyday life, we have to know exactly what we are saying. The little fine-print, italicized literal translation that disappears almost immediately isn’t enough. I don’t feel confident that in most situations we should be using девушка for excuse me.

There is no gender for the salesperson implied. I read that this was normal in the past, but I can’t find anything that tells me that male salespeople were called this. Do male salespeople mind being called “girl”? Is this because there weren’t male salespeople? Who knows? I am not Russian, that’s why I am here…

Also, пожалуйста doesn’t appear in the translation either. Perhaps “could you not” equals “would you mind”, etc., but regardless, that isn’t “please”.

I get that some phrases can be perfectly equal between languages despite huge literal-translated differences, but still, this seems to go into an area where the person speaking could be inadvertently offensive and risk conflict.

P.S. In another area привет is suggested as “Hello”, not “Hi”. One of the first things I learned was that здравствуйте/здравствуй was the correct way to say hello when you aren’t on “ты” terms with someone. There’s no mention of that here at all. We aren’t even taught the word, so far, in Russian 1.

Teaching the Feminine, Neutral and Masculine Word for ‘My’ is great but then trying to have people guess which of the three categories the new words are from Eg; pizza, table or bag match to the three different types of ‘my’ is just confusing. I have not idea and it is not testing my knowledge of моя, моё or мой. Maybe set up three words from each category and then ask someone to match the correct ‘my’ to them.