This is the Forum for the N5 Grammar course: 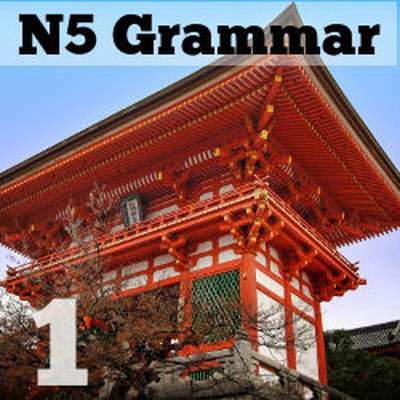 This is a course that is paired with the series of videos and lessons on JLPTBootCamp.com. To pick up the full grammar guide that is packed with extra examples and explanations visit the premium site:...

From Level 10 onwards, the levels become much more difficult because of the spaces that are added into the sentences. The spaces mean that it won’t tell you right away when you’ve typed the right answer (unless you type the spaces, too); you have to hit “enter” to get any feedback. I’m not about to memorize where the spaces are, so this is a big problem with items that have more than one potentially correct answer.

Starting at Level 25 it gets even worse, because the sentences start having ideographic spaces and full stops together. I’m not sure exactly what the common factor is, but in some sentences with ideographic spaces and/or full stops, a right answer will be marked wrong if it leaves out the spaces and/or the full stop. (At first I thought it was if I leave out either two spaces or a space and a full stop, but there are sentences that were marked correct in spite of this, so I really don’t know what the exact cause is. Either way though, it would be solved by taking out the spaces and full stops.)

In some levels (I’m thinking especially of 25 and 27), the translations don’t give nearly enough context to know exactly which wording is expected:

(And of course, this is compounded by the aforementioned fact that it doesn’t automatically tell you when you’ve typed the right answer, because of the spaces.)

Up to now I felt like these issues weren’t worth bringing up, but just now I discovered that I’m going to have to skip Level 31 entirely, because the issue with the spaces means I would have to either “ignore” nearly all of the sentences, or memorize where the spaces are and worry about putting in the full stops. (Before today, I already had to ignore nearly half of the sentences in Levels 27 and 29, and I might have to ignore a decent chunk of the sentences in 33 and 35.)

First off, sorry for all the frustration the spaces have caused. I can totally understand how this can be a huge pain.

All answers should be marked correct without spaces and without periods. The spaces are there for the shown phrase, because well that is the format of the N5 and this is a course for N5 grammar. If there is one that is giving you fits please let me know. Keep in mind that I have to put in all permutations in order for it to be marked correct. With/without kanji and with or without some kanji, with or without periods (or full stops) etc… I have to put in about 10-12 different possibilities for the average sentence. For example, I just added all the variations for “Is this good?” I could think of, which ended up being about 20, and yes, I sometimes miss one. The Memrise interface is clunky at best. I apologize for that.

I don’t have time today, but I’ll audit the levels one by one and make sure nothing is missing. Needless to say, it will take some time, so please be patient.

I think I’ve fixed most of the obvious mistakes in the answers. Let me know if you are still having trouble getting correct answers. For best results, don’t use spaces and use periods if you can.

All answers should be marked correct without spaces and without periods.

Rereading my post, I realize I could’ve been more clear: Answers only get marked wrong (despite being correct) if there are ideographic spaces and/or a full stop involved. If there are just regular spaces, the issue is that if I don’t type those spaces, it doesn’t automatically mark it right if I’ve typed the right answer. I have to hit the enter button to find out if it was right or not. It just creates a lot of uncertainty when there’s more than one way to answer the question. Without the spaces, I could just keep trying different variations until I got the right answer.

I understand if you want to leave the spaces in because you want to mimic the test format, but if you could change the ideographic spaces to regular spaces, and maybe take out the full stops, that alone would help a lot, as I believe that will prevent correct answers from being marked wrong.

For best results, don’t use spaces and use periods if you can.

I’ll try that, thank you!