I’m new to this forum so I’m not sure if I posting in the right place! I was just wondering about the Arabic 1-7 course created my Memrise - is it MSA or Egyptian Arabic? Thank you in advance.

Its sound seems closest to MSA.

I hope you enjoy the course!

Since Arabic now has an official Memrise course, it should appear at the top of the list of languages, no? 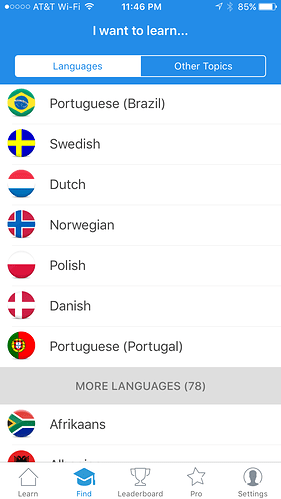 It should appear above “More Languages” for increased visibility. I’ve been looking forward to this course and didn’t find out about it until just today, even though it was released 10 days ago.

These languages on the right side are the top categories, aka: most popular at the moment.

While there’s finally an official Memrise Arabic course, it’s still not as popular as these mentioned categories/languages.

Not yet at least! MWAHAHAHA!

it’s still not as popular as these mentioned categories/languages.

The lack of visibility may have something to do with it.

Also I was under the impression that all languages with Memrise-created course were listed at the top. I guess not.

You are right. That is the way it works and that is how it shows on my mobile phone: 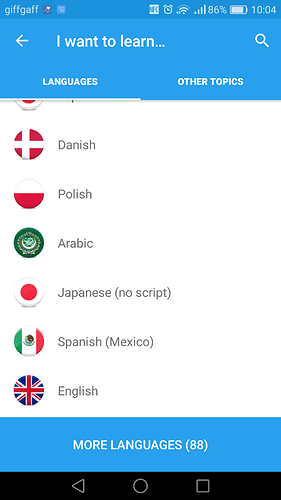 Your phone language might be set to English (US) and that is why you are not seeing the Arabic category, since the Arabic course we have published is for English (UK) speakers, although we will publish the Arabic for US English speakers today, so it will come up in the list of languages anyway.

The new Arabic courses for English (US) speakers have been published and are now live. Enjoy!

This appears to be a no-typing course, is that correct? Are there plans to introduce typing in the future?

Thanks for your question. We are thinking about it. Would you like to have the option to type the letters? Thanks.

Thanks for the response! I’d love the option - it exists for the Russian course for example. I’ve been learning to type with an arabic keyboard and I find that you learn a lot from independently spelling out the words, so I would very much prefer to have the option, at least. Let me know if there’s anything I can do to help!

Who else is excited as fuck that there is finally an Arabic course officially?? I’ve always wanted this and now I finally get to learn Arabic the proper way!! The MEMRISE WAY!!!

good, cuz I really wanna try out my Arabic keyboard!!!

In Arabic 1 Level 15, it seems the female voice recording for بدون is mistakenly set to من.