Just wanted to let my fellow Swedish learners on memrise know that new audio files are being added to this course, too.

I am getting them from forvo for the most part and, unfortunately, the quality is not always too brilliant, but, hey, it is better than NO audio at all!

So, hopefully, that course is now complete as far as audio files are concerned!!!

Just FYI - if you have further comments about part 2 of the 8,000+ Most Common Swedish Words course, can you post them here?

I seem to have added the wrong forum

This is the right one:

@TheFour-GatedDanzig Just FYI - if you have further comments about part 2 of the 8,000+ Most Common Swedish Words course, can you post them here? I seem to have added the wrong forum

ACK This is the right one: https://community.memrise.com/t/course-forum-4-500-most-common-swedish-words-by-sehiralti-and-amanda-norrsken/2737/3

att radera to erase, to delate. I’m pretty sure this should be DELETE, rather than reporting a crime (delate).

Thanks for letting me know!

Would you mind adding sacred or ecclesiastical for kyrklig? And aggravate for att försvåra? Thanks!

I am ECSTATIC to have an active contributor on this forum, especially for this part of the course, which has not been on my top-priority list, to be honest, for whatever reason.

What sources are you using for the translations you suggested, if I may be so bold as to ask? I am always happy to find out about new dictionaries. Or are you just using the knowledge you have picked up while reading?

I am just checking on “ord.se” (which has been taken over and is a bit different from how it used to be) and this is what I see for “försvåra”:

Do you have any specific sentences in mind where “försvåra” would be best translated by “aggravate”? I am not saying you are wrong or anything, I’m just curious.

Further research is giving me “to aggravate”

This is one of my favourite dictionaries:

I should post more, then. Sometimes I feel like I’m being annoying asking for edits! I think this course has been 98% good so far, but of course, I’m not fluent and also may have overlooked some when I was rushing to learn a level and didn’t double-check. Maybe I’ll go through the last 30 again…

I use this http://www.lexilogos.com/english/swedish_dictionary.htm ,but most of the time I use the one you linked. I also have some google translate from Chrome? I don’t remember installing the app, but if I click on the word, it’ll translate for me.

By the way, do you have a good suggestion for where to buy novels cheaply? I know of bokus, abe, and amazon, but I’m hoping there’s some clandestine cabal of Swedish books online.

OK, I don’t know why I’m going through the 30 because I have things to do, haha. But here goes.

phew. I’ll be sure to check each level now when I do them. Really minor errors for the most. Sorry if it’s a hassle.

By the way, do you have a good suggestion for where to buy novels cheaply? I know of bokus, abe, and amazon, but I’m hoping there’s some clandestine cabal of Swedish books online.<

Where are you located again? I managed to score a few from a guy who was just selling his stash via ebay small ads (ebay-kleinanzeigen) here in Germany. And then I use a company called “Tauschticket”, which is basically a book-swap portal. I have got a few from there as well.

There are loads of second-hand books available in Sweden, but the problem is the payment. A lot of people sell their books via various online places and sometimes you can contact the individual seller and ask them if they can ship abroad.

I still have some to be read, sitting on my shelf. I am also enjoying listening to Swedish crime books via our Audible subscription. I seem to be able to understand the plot pretty well of the story I am listening to right now

Thanks so much for taking the time to do this - especially when you couldn’t really afford the time!

I will get to these in due course

Do you have anything to do with languages in your line of work, by the way? Or is it just a really really serious hobby of yours? Your ideas for improved translations are brilliant!

Please don’t feel bad about pointing out any errors or other problems: that is what platforms like memrise are all about, using crowdsourcing to create a great product.

We are on the way, but not there yet

Oh, I forgot to add

I’d love to have a career in languages. I suppose it’s a serious hobby, but I treat it more as an apprenticeship, which is why I’m always on here and spending hours studying, haha. Of course, so many Scandinavians know English, French, Spanish, and German…

att bortse från probably works best with ignore in the definition. I haven’t learned any new words today with this whole debacle, but I might do level 31. Shall keep you informed.

ett moment an element, a phase. It’s a cognate, so should have moment in the definition, even “Det är ett Moment 22” It’s a catch 22 situation.

This one has bothered me FOR AGES!!!

I have looked into it already, but was at a loss as how to change the entry.

I wasn’t aware that “det är ett Moment 22” was the Swedish for “a Catch 22 situation” (one of my favourite ever books, by the way

This is the definition on ord.se: 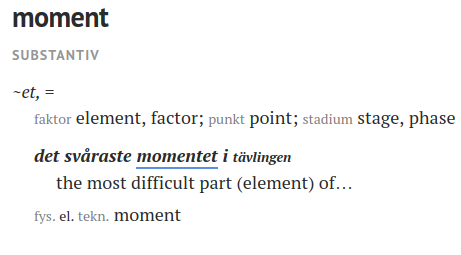 The cognate part of “ett moment” is to do with the English word “momentum”, I think, not so much the “ögonblick” meaning.

hm, yeah, maybe I was too quick and thinking of German. Norwegian is øyeblikk, too.

It seems that “ett moment” is also used to mean moment in this sense - “a deciding moment” would be the translation here, no?

I wonder whether the massive influence of English on Swedish is making this meaning appear more and more in Swedish?

So, two separate entires for stadga?

“I wonder whether the massive influence of English on Swedish is making this meaning appear more and more in Swedish?” Scandinavians consume a massive amount of media from America and the UK, coupled with them having to take Spanish or French or German or two of them: German is der Moment, French le moment, Spanish el momento. They’re getting hit from all sides, haha.

And sorry for slave-driving you right before the weekend. No need to feel rushed.