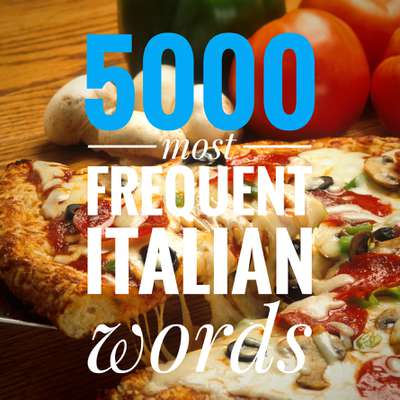 ★ This course features the 5000 most frequent words in Italian ★ This covers 96% of total occurences in any given text corpus ♫ 100% Audio ♫ Based on: "Il Nuovo vocabolario di base della lingua italiana" ★

Hi there,
I’m @Robert-Alexander I created a 5000 most frequent Italian words course like those for Spanish, French or Dutch. Please see the syllabus for my sources and methodology. The course is based on a scientific word selection and has full audio support.

Things I’m maybe about to do next:

Thanks so much for this course. It is exactly what I was looking for.

I’m posting to report an small problem. The sound file for avvenire the verb, and l’avvenire the noun are identical. I was just given one of the question types that involves identifying a word from the sound file, and of the three choices, two of them were the same exact sound. So it was a coin flip for me.

Thank you very much. I’ve fixed avvenire (sound: “l’avvenire” vs. “avvenire. Io avvengo.”) I added this issue as a task to the to do list.

Glad to help. Two more observations in the same vein:

I’m pretty sure the entries bene (adv) vs. il bene (noun) have the same issue.

The sound file associated with chiedere is actually the word domandare.

Bitte sehr! I found another:

I think there are multiple sounds files because sometimes I hear il comune with and without the article, when what I am being asked for is the noun.

I also noticed that appunto appears in two levels (2 and 22).

Fixed all four entries. The sound files are now ok. Maybe -in the far future - all nouns (and only nouns) should start with the appropriate article. The way I created this course, it was hard to control what is actually said in the MP3. I’ll find out…

Hi Robert. I have a few more little typos and issues with sounds that I’ve found:

I also making a list of definitions that I get easily confused, in case that will help you with number 1 on your to do list.

I’ve fixed all the words. Thx. Keep up the good work! I’m really glad someone helps me.

Glad to be of service. Here’s some more proofing for you:

indagine: no article in the text of the word

There were a few words with no article on the sound file in today’s batch:

Not yet sure what do with the words with missing article in the audio file. It’s very important that only nouns’ sound files have articles to avoid confusion. And it’s important that in cases like avvenire the noun has its "l’ " for easy recognition. Let’s focus on these two issues first.

Of course it would be nice if every other noun was also pronounced including the article. But there is no real confusion here as the the course always asks for the noun. So this is a low priority task. There must be hundreds of nouns with such (inferior) sound. Here’s the problem: I don’t find nice sound files including the article. So I thought about using TTS generated sounds. That’s OK for a few words where a better sound file is badly needed. The pronunciation is annoying though. I would rather avoid having hundreds of TTS generated sound files. I’ll think about it. However, it’s nice to have a list of nouns without article, but I won’t fix these nouns until I’ve a better solution for this issue.

Of course. I wouldn’t expect there to be an easy solution and I’m adapted to the difference between what I’m hearing and typing (I am a musician and I try to work at maximum speed so at first I was flubbing), but I figured you would like to know. Thanks again.

Hi Robert. A little more proofing for you:

la morte: the attribute says it is a masculine noun
il movimento: typo in the definition on "exercise"
locale vs. il locale: there may be an ambiguity in the sound files

And a minor idea:

Maybe it would be a good idea to specify gender and number on the clues for the definite article. I think on “le” for example, the clue is something like [not the pronoun l…], but there are many pronouns/article pairs that share the initial letter “l”.

I agree that it is right to avoid giving too much information in the hints. One point in favor of just giving the gender and number on the articles, though, is that that pretty much is the definition of the word in question.

On “avvenire”, for example it would be good to find a way to differentiate it from “capitare” without using that particular hint (not l’avvenire). Right now the definitions are otherwise identical (ignoring word order). I don’t know what you use for your dictionary, but having just consulted mine is looks like “avvenire” just means “happen, occur” and “capitare” means “happen” but can also take the sense of “arrive, turn up.”. So maybe they could be differentiated in that way.

I understand what you mean on (3). The trick to a good definition for the learner is to find a way to differentiate those subtleties of sense with the minimum number of words. It’s not always easy or obvious how to do so. For the most part I find your definitions very helpful, so I think you’re doing a good job.

The attribute box on “il pensiero” says “noun f”. It is possible that the noun “la morte” still has the same issue, that is, the attribute box (the little box underneath the definition that gives part of speech) still says “noun m,” but I’m not sure because I haven’t reviewed it in a few days.

My fault. Fixed morte (again) and pensiero. I’ll check the articles in Excel. Your work is wicked awesome.