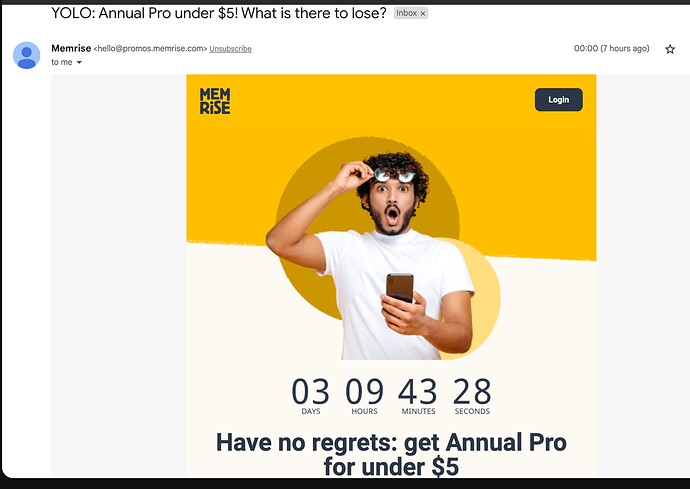 I was sent this email last night, and, upon confirming that it wasn’t a spam email, I actually got pretty excited because I’m very broke and am going off-the-grid in 2 or so weeks in the middle of the Australian outback, and won’t have phone reception for a decent chunk of time.

Of course, the actual annual pro subscription isn’t actually under $5 for the whole thing… did they just mean per month? Is this just misleading titles for attention? The annual is 50% off, so $35 AUD.

I got no email but I think memrise has done these things before, you’re a lucky winner I think

Well, it says “annual”, so I suppose that’s what it is!

FWIW, if you think about buying a sub, note that offline courses will soon be gone. See here:

It’s very unlikely we’ll see an offline mode that is as full featured as on the old version, as that took an incredible amount of resources to develop and maintain as we have to duplicate a lot of work to store and process data both locally on apps and on the server and it’s the cause of several persistent problems we have. In addition we can see from our analytics the usage of offline mode was never very high and has been rapidly declining every year as mobile data has become cheaper and public…

Does anyone know if we’ll still be able to download a course or is that tied in with it?

Well, we’re talking about assumptions, but offline capabilities aren’t really connected to the ability to download courses for offline use (which, AFAIK only concerns the apps), particularly as you need external / non-Memrise utilities to download anything

I thus wager that you’ll still be able to download stuff as long as the Memrise team doesn’t incorporate any fundamental changes in their code. The latter is what I’m being far more worried about.

Last but not least: in the Android app I constantly download courses to force them to update, i. e. after I have changed a course’s content. When that is gone, it’s probably back to logging off and back in to update courses …